CAPACITY CAMPAIGN: RAISE YOUR CAPACITY TO DO SOMETHING BETTER 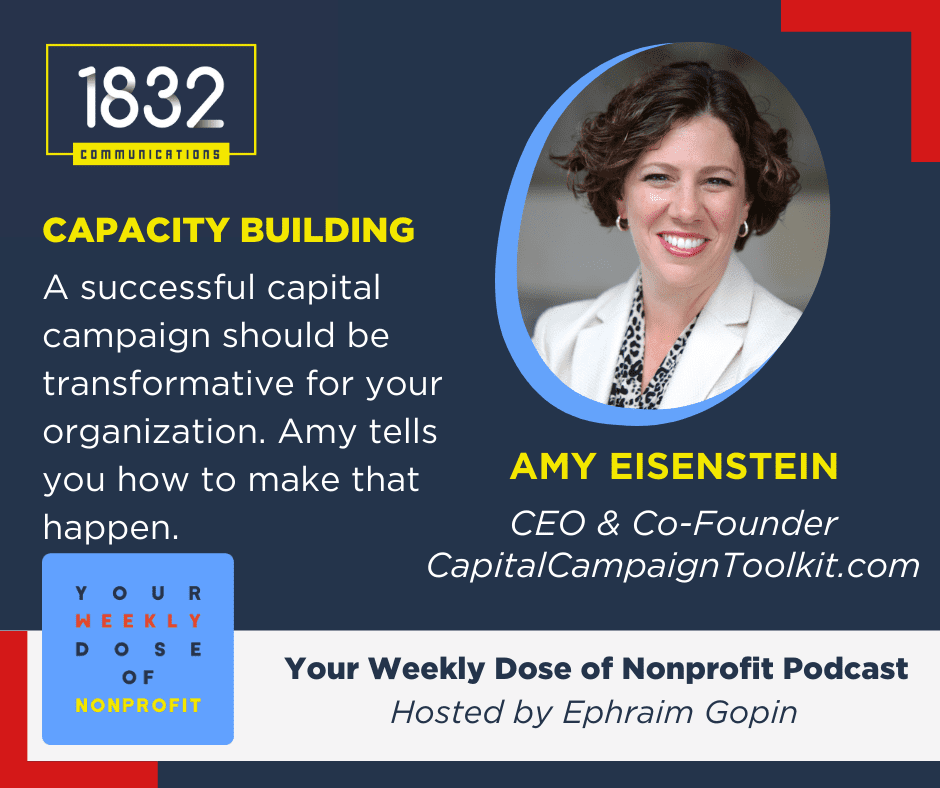 She is a fundraising authority and a capital campaign expert. Amy Eisenstein of Capital Campaign Toolkit knows the secrets to a successful capital campaign…and why they sometimes fail. In this episode Amy discusses

Below you can listen, watch or read this podcast episode.

Ephraim: Welcome to this edition of the Your Weekly Dose of Nonprofit podcast, the podcast that delivers actionable items you can implement at your organization right away. I’m your host Ephraim Gopin of 1832 Communications. Today I’m really happy to have with us a fundraising authority and a capital campaign expert, Amy Eisenstein. Amy, how you doing today?

Amy: Good. Thanks for having me Ephraim.

Ephraim: A pleasure. Glad to have you here. Let’s introduce you to our listeners, watchers and readers.

Amy Eisenstein, ACFRE is CEO and co-founder of the Capital Campaign Toolkit. Her published books include Major Gift Fundraising for Small Shops, Raising More with Less and 50 Asks in 50 Weeks. Amy became an AFP certified master trainer in 2009 and served as the president of the board of AFP New Jersey in 2014-2015. She became a certified fundraising executive in 2004 and received the ACFRE in 2013. For more information and free resources, visit AmyEisenstein.com or CapitalCampaignToolkit.com

What Is A Capital Campaign

7 Phases Of A Capital Campaign

Ephraim: Excellent. In a typical capital campaign, what are the different phases and what does an organization have to accomplish in each phase?

Amy: Probably most watchers and listeners have heard of the public phase and quiet phase or silent phase. But at the Capital Campaign Toolkit we actually break down a campaign into seven phases. We think chunking it out makes it much easier to accomplish the steps that you need to complete your campaign successfully.

We start out with some pre-campaign planning, where you’re doing exploratory work, right? What are the campaign objectives? What do you want to raise the money for and how much will that cost?

Phase two is feasibility, testing the campaign objectives, the case for support and that working goal with your lead donors and prospective donors. Is this campaign going to be possible? That’s phase two.

Then it’s time to start fundraising. That’s step four, which seems kind of late but honestly a really well laid out plan in the first three phases will help you sail through the rest of your campaign. So phase four is the quiet or the silent phase and that just means that you are fundraising from your top prospective donors and the people that are closest to your organization. In the silent phase, it doesn’t mean that nobody knows about your campaign. It just means that you’re asking for gifts from the largest potential donors and your board members and the people that are closest to you before you go out to do the public phase.

And then of course the final phase is the post campaign, when you’re thanking your donors, you’re letting them know how the campaign ended up, what the results were and the impact, collecting pledges those types of things.

Ephraim: I like all seven phases but number seven is my favorite, to make sure you’re saying thank you to everybody and the fact that you call that…

Why NOT To Conduct A Capital Campaign

Ephraim: …a phase is great. I love that. Please share with us three reasons why an organization should not conduct a capital campaign.

Amy: Yes. So I think there’s one big overarching reason but then I’ll give you a few reasons within that and that is, if they don’t…  if the organization doesn’t have a strategic vision for getting to the next level of programs and services, they should not have a campaign.

So that being said, organizations come to me all the time and they want to either grow their endowment or have a campaign because it’s their 25th or 50th anniversary or because they just want to raise more money for their annual fund. Those are three reasons not to have a campaign.

Now I know some people are saying, thinking, oh my gosh, what do you mean an endowment or an anniversary isn’t a reason? So let me just explain briefly. An endowment campaign is wonderful. Every organization wants one but it should be a small component of a bigger campaign. You want to be able to give donors lots of choices of what to give to and many donors won’t give to a capital endowment campaign, especially during their lifetime. They might do a bequest. So an endowment growing your endowment should be a piece of a larger campaign.

Ephraim: Excellent. I like that one about the 100th anniversary idea and looking forward. So today’s actionable item, speaking of looking forward. Please tell us four things a nonprofit must have ready or prepared in advance before even considering whether to embark on a capital campaign.

Amy: I think the number one thing is strong leadership and let’s start with strong staff leadership. You need someone who’s motivational, who’s enthusiastic, who wants to get out and talk with donors. So to me that’s really important. Having some development team if you  can or planning to hire somebody who’s going to coordinate all the details and the moving parts of the campaign. So strong staff.

You want a strong dedicated Board but that doesn’t mean that your Board has to be able to give the leadership level gifts that can come from other parts of the campaign. But the Board being on board is critical with the idea of a campaign.

And then really it’s about having the vision. What are your campaign objectives? What do you want to raise money for? So I would say those are some of the critical things. There’s lots of things but let’s start with those.

Ephraim: Just a follow-up question on the CRM: You’re saying Excel would not be something you’d advise using in a capital campaign?

Amy: Correct. Excel, Access, those are not acceptable for a capital campaign. If you’re really going to have a lot of donors and a lot of moving parts, you should be using fundraising software that is designed for fundraising.

Ephraim: Perfect. You’ve been a fundraising consultant for more than two decades. You’ve authored three books on the topic of fundraising. What’s the one mistake you see small shops making over and over and how can they fix it?

Amy: You know… listen, small shops do a lot of great things. Let’s just start with that. Everybody in a small shop is working their tail off and working hard. So I’m gonna qualify what I’m saying.

But the number one mistake that I see the vast majority of organizations making is not asking enough. There’s either… whether it’s the reality or excuses. There’s no time, there’s no resources, the people in place don’t have confidence or the wherewithal to go out and ask for major gifts or sizable gifts from individuals. And you know frequently when I’ll do a webinar or be speaking to a group and I’ll ask how many people asked individuals for specific dollar amounts in a personal way, so whether it’s on Zoom or actual face-to-face, the vast majority of small and mid-sized nonprofits people are asking less than 10 or 20 times a year and you’re just not going to raise the gifts that you need by asking so infrequently.

Ephraim: Lightning round. Let’s learn more about you. What got you started on your nonprofit career path?

Amy: Yeah, that’s a good question. I mean I’ve always been… ever since I was a kid, I was interested in community service and helping people. I did go to graduate school for a degree in nonprofit management, so I knew that’s where I was going and then I got my first job in fundraising and I never looked back.

Ephraim: Who did you work for? Who was that first job with?

Amy: It was a domestic violence shelter in Bergen County, New Jersey.

Ephraim: Got it. So given all your years, decades worth in the sector, if you could shake up one thing in the nonprofit world, what would it be?

Ephraim: You should trademark that if you can figure that out. You’re a public speaker, an accomplished public speaker I might add. Like it or dread it and why?

Amy: Love it, love it. It lights me up. I think some people probably speak in public and they dread it but for the vast majority of people that are successful public speakers, you have to love it. There’s nothing like being in front of an audience and seeing their faces light up with new ideas and inspiration. So love it, love it, love it.

Ephraim: Excellent. You’re also a published author. One piece of advice for someone considering writing a book?

Amy: Yeah, so I think of course when that great big idea strikes you, I would say go for it. The best piece of advice for writing a book I ever got was that if I wrote just one page every single day, by the end of a year I could have a 365 page book. And that was really helpful because there are some days you don’t want to write and other days you don’t think you’re gonna make it. But you can write a page a day and so to me that’s worth it. The other  thing of course is don’t think you’re gonna make a lot of money if you publish a  book.

Ephraim: Both of those are very, very important. Tell me about a family member who had a major influence on who you are today.

Ephraim: I like that. I like that a lot. Lastly we will turn the table. You get to ask me one surprise question. I have no clue what it is in advance. Go ahead.

Amy: Excellent. Your company is called 1832. What on earth is that number about?

Ephraim: It is all about storytelling, which is central to fundraising and marketing. So the quick story is: My earliest childhood memories are from when we lived in Jacksonville, Florida back in the mid 70s. My earliest memories are from ages three and four. I remember visiting Disney in Orlando during the bicentennial year in ’76. But I also remember almost burning down our house during one Hanukkah when I was about three and a half. So there’s that. I didn’t, by the way, just for anybody watching. But those are my earliest childhood memories.

Now 1832 is the year that Jacksonville, Florida officially became a city and it kind of ties it all together for me that when I work with clients, I want to be able to tell their story from its earliest point all the way till today, tomorrow and beyond. Kind of the same way that I’ve been telling my personal story for as far, as long as I can remember. So that’s the name.

Ephraim: All goes back to storytelling, which is important for every fundraising campaign you’re ever going to do.

Ephraim: Thank you very much for appearing on the podcast. You can learn more about Amy’s work at capitalcampaigntoolkit.com You should also absolutely subscribe to her e-newsletter at  AmyEisenstein.com Definitely connect with her on LinkedIn and on Twitter @AmyEisenstein. Amy, it was a real pleasure learning from you today.

Amy: Thank you so much for having me.

Ephraim: Have a good day.