Lessons From Jobs I Don’t Talk About Too Often 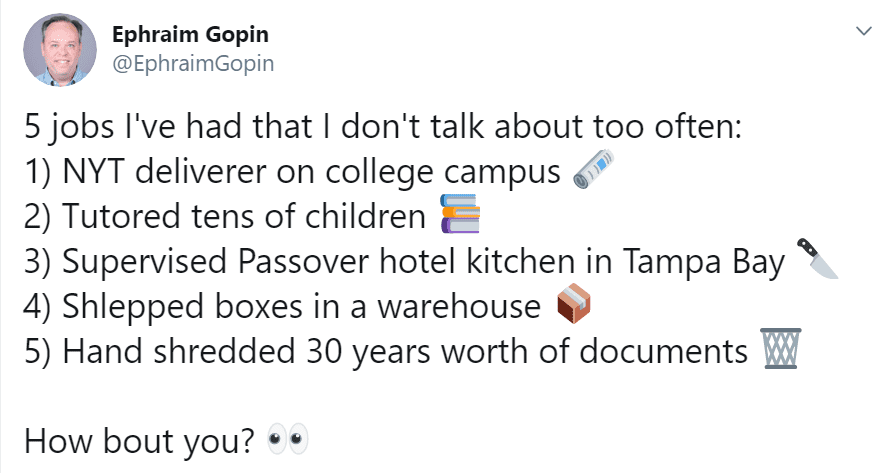 When I was 13, my dad sat me down and said, “From today until you retire, you need to be working. Want money to go out? Work. I’ll always be there to help you supplement if you don’t earn enough or need a little extra. But from today forward, you go to work.”

Some of you reading that may think it was the worst pep talk ever. Actually, I’ve never forgotten it. Because even in bad times, I took on some really crappy jobs in order to ensure that I had spending money or could help pay the bills at home. No sitting around.

Which got me thinking: It’s been 34 years since my dad’s talk. What jobs have I had that I don’t discuss often and what lessons did I take from the experience that stay with me till today?

The Jobs That Time Forgot 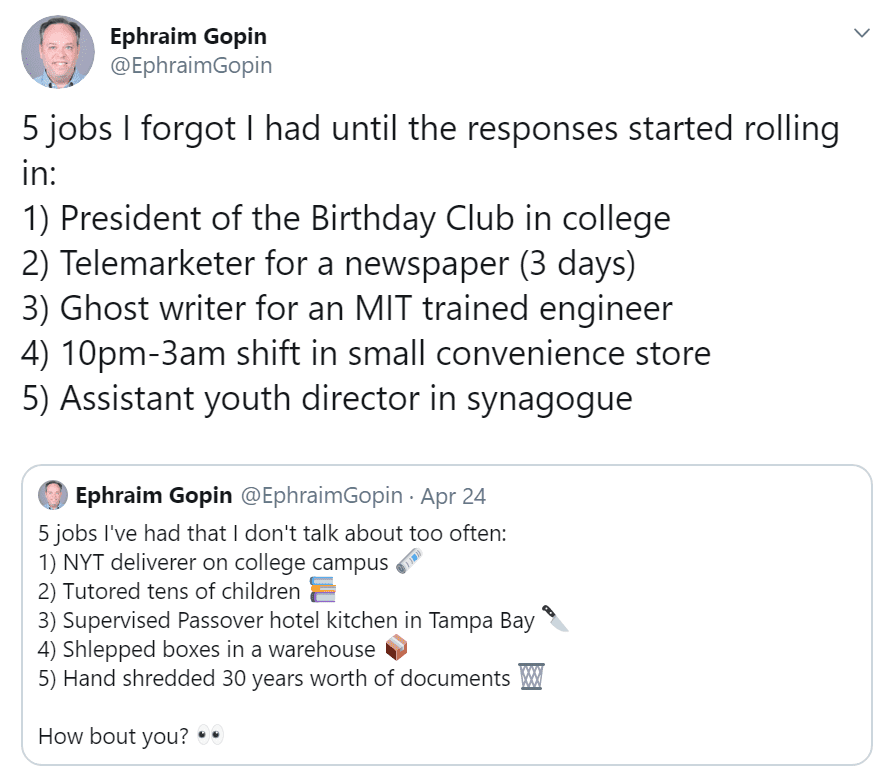 In university, I was up at 4:30am to deliver the NYT around campus. Crazy time to wake up but I had to make sure it was in student mailboxes by 6am.

Lesson: Being punctual isn’t just a good trait. Others are counting on you. Don’t let them down.

In 2003 when I needed a job, I answered a job posting my friend Gary had posted: Be a shlepper (stockboy) in a warehouse. Gary at first refused to give me the job because I was over-qualified. My answer? No work is beneath me.

Lesson: When I was a CEO of a nonprofit, I never asked an employee to do something I wouldn’t do myself. Just because you have an MBA doesn’t mean you can’t lift boxes, answer the phone, take out the garbage. I have always detested bosses who think they’re above everyone else. It’s disgusting behavior.

Side note that I just remembered: I worked for 2 summers as a teen as a shlepper in a bottling plant. They’d throw me on the forklift and raise me 30 feet off the ground to get down boxes from the high shelves. I rode with the truck drivers to help with deliveries. It was the best of times.

The Birthday Club thing? It was in university. Let’s just say I have no lessons from that job, outside of it was one of the dumbest- and funnest!- things I’ve ever done. Let’s move on…

At a hi tech gig I had a few years ago, I used to tell people: I’m not an MIT trained engineer but I play one on TV. I was the online voice for someone who was a hell of a lot smarter than me.

Lesson: Research, research, research and always be learning! It took me a long time to feel confident enough to “voice” this person. It involved learning a whole new sector but once I got the hang of it, I was able to do so competently.

Lesson: Causing a fire which almost burns down an entire neighborhood is generally frowned upon. And that’s all I’ll say on that subject.

Just Clean It Up

Sure I’ve had some bad and odd jobs. But I’ve tried to take away at least one important lesson which will serve me well later. I was always taught to learn from the good and the bad.

Which is why when I asked on Twitter, I got some very interesting responses.

5 Jobs I don’t talk about much?
1. Busboy (3 days)
2. Street sweeper (with a broom and trash can on wheels)
3. Sports reporter
4. Arcade attendant
5. Bunch of grapes

The arcade attendant spoke to me because that would mean being able to play as much Skeeball and Space Invaders as possible! When I asked Jim what he learned from those jobs that he still uses today, here was his answer:

Street sweeping and fundraising: Just clean up the mess.

Arcade attendant and fundraising: Just give the donor what they want and anticipate when people need something.

All of them: It’s mostly about doing the same thing over and over again. A lot.

We’ve all had jobs at some point in our past that we have tried to forget. Like nonprofit communications expert Reanna, who worked with a…you’re reading it right…. mean parrot.

What doesn’t hurt you helps you grow? Actually in this case, turns out the parrot was very territorial and had to be hidden when it was in common spaces or would peck people. Ouch.

But what did Reanna learn? “They all taught me quite a bit about diplomacy and handling fast-paced work without getting outwardly ruffled.” Those are lessons that are useful at any job.

Or reporter Sam Sokol, who told me he was a terrible busboy and once spilled soup on a customer. Guessing that’s a big no-no in the restaurant business. But knowing what you’re NOT good at is also important to know!

1. Working in marketing for a firm organizing conferences for startups.

2. Working as an editor at a short lived bohemian quarterly in Tel Aviv.

3. Busboy in a Manhattan restaurant.

In my tweet above, I had a job for 3 days. My job was to sell subscriptions of the Toronto Star newspaper to people over the phone. I was given a list of names and numbers, a copy of what I should say and that’s it. I hated where I was working and that’s why I only lasted three days.

During those three days I sold the most subscriptions among the telemarketers.

Here’s the thing: That was my first sales job. I learned I could do it successfully. Coincidence that I worked as a fundraiser for many years?

I look back at that list of non-memorable jobs, smile and realize that those were learning opportunities. As much as I may cringe at the memory, it was valuable life experience. And I’m forever grateful to my various employers.

The Personality Behind The Logo
Gratitude Tuesday
Remix, Repurpose, Repost