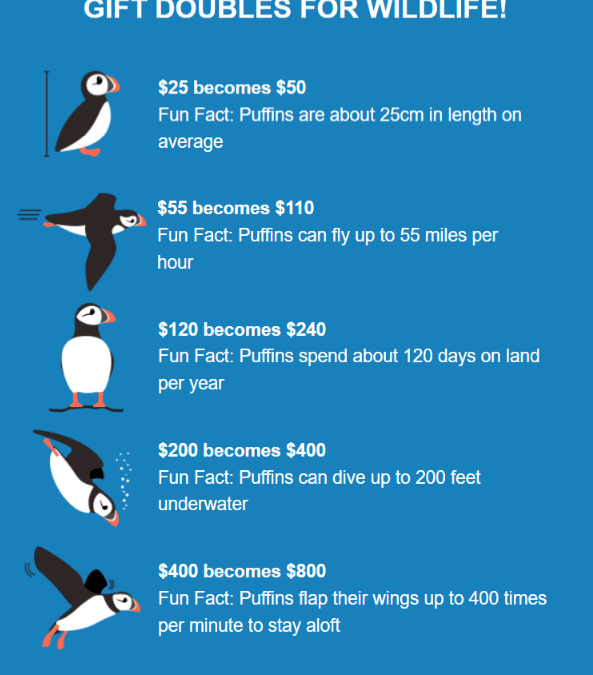 There’s plenty of fundraising and marketing lessons to learn from what I saw in my Inbox. This year I have 20 takeaways and I’m splitting them up into three posts.

Before I begin, a note to the reader: Every organization I write about below is doing critical work out there. My critique and analysis is of how they approach donors and potential donors via email.

I subscribe to over 100 nonprofit enewsletters. What surprised me (in a good way) is that only 46 organizations emailed me about GT. Less than half.

The first email arrived in my Inbox on November 10, a full nineteen days prior to GT. That email came from the Michael J. Fox Foundation for Parkinson’s Research. Interestingly enough, they were also the first charity to email me on Giving Tuesday itself- at 12:06am. 😯

Some general data from the emails I received:

Not sure why three nonprofits emailed me about their GT campaign prior to Tuesday… but then never emailed on GT itself. Some chose to email me just once on the day itself. Others may have emailed a few too many times.

In short, plenty of takeaways which relate to your fundraising and marketing efforts, end-of-year campaigns, email, online donations, content and everything in between.

In general, most organizations I came in contact with view Giving Tuesday as a money grab. It’s a day to give, so let’s ask for funding. Money money money.

“GivingTuesday was created in 2012 as a simple idea: a day that encourages people to do good.” – Giving Tuesday website

There are many ways to do good for people in your community. Except in my Inbox: The only way to do good on GT was to donate money.

Not one nonprofit suggested other ways to be generous on GT. It was all about the money.

Well, I take that back. On Nov. 22, one week before GT, Westminster Neighborhood Services included this in their GT preview email: “You can also support the mission by signing up to volunteer.”

270 emails, only ONE mention of a way to give other than money.

If GT was founded to allow people to be generous in every way possible, how a decade later has it become a day where nonprofits assume everyone is a cash cow?!

Here’s the opening to an email I received from UNICEF USA at 6:35am on GT:

“Today is all about supporting the organizations and causes you care most about. And if you’re getting this email, it’s because you’re a part of this robust community advocating for a world that protects the health, safety and future of all children.”

What a great opening! But then the paragraph closed with this:

“What better way to celebrate today than with an upgraded, TRIPLE matched gift to UNICEF?!”

Apparently the only way to support is with a financial donation! Oy.

Fundraising is all about building relationships. When you take a day of doing good and turn all your email subscribers into cash cows, you’re not relationship building. You’re simply grabbing as much change as you can.

One more example from Friends of the Earth (arrived at 2:19pm on GT):

“We thought donations would skyrocket when we announced our Giving Tuesday match opportunity given the dire state of our planet — but we’re falling short of our goal, and we’re running out of time to fund our planet-saving work before our match expires at midnight tonight.”

As if it’s the donor’s fault that they’re falling short of their arbitrary goal! That destroys relationships.

A fundraising tip: That one sentence above uses the word “we” and “our” a total of five times. Not once does it mention YOU, the donor. Check your fundraising copy. The focus should be on what the donor is doing and the impact they’re having, not your organization.

Takeaway: Yes, you should use email to ask for donations. But it’s imperative that you offer multiple ways for people to get involved with your mission and impact in the community. (Volunteers can turn out to be some of your best donors!) Fundraising isn’t about the money. 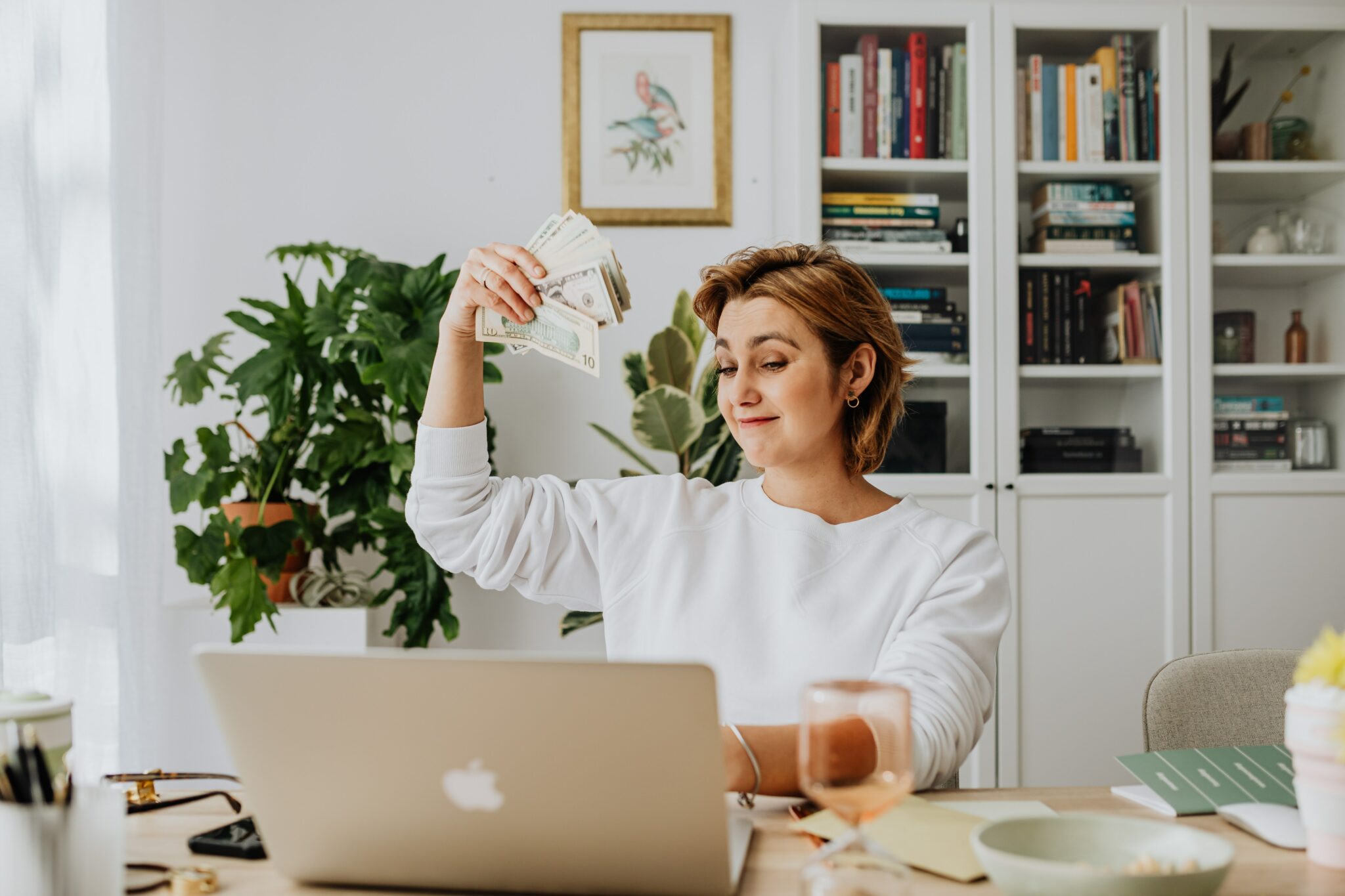 Number 2: What happened to social proof???

When we need advice for what product to buy, we turn to family and friends. We trust their opinion.

Same goes for charities. Looking for where to donate? People will ask and rely on their network for ideas.

Social proof is critical to a charity’s fundraising and marketing. Listing names of donors, posting testimonial videos and quotes allows community members to see people who are like them. If that person donates, maybe I should become a donor as well.

Know who didn’t use social proof as part of their GT campaigns?

Almost every single email came from the heads of the various organizations. Emails from a donor as to why they give? Nope. Emails from volunteers, community advocates and activists discussing their connection to the organization? Nope.

Takeaway: Diversify who signs your emails, blog posts, direct mail pieces and social media posts. Not just the CEO and beneficiaries. There are plenty of others out there who can tell your story. Subscribers will enjoy the variety and when they see someone they know and trust, it can help move them to take action.

In the next post I’ll discuss GT and matched giving (plenty of nonprofits had offers).

But one match that caught my eye was the ACLU that had a matching gift offer for monthly givers (the donor would match the first month’s donation).

At a time of recession and high inflation, when people may be careful about spending, a small monthly donation isn’t a tough ask. Given that monthly donors have higher retention rates and higher lifetime value, a robust recurring giving program should be part of every organization’s diversified fundraising portfolio.

Kudos to ACLU for trying to get new donors in the door in a different way. Now they have plenty of new donors who aren’t just one-time givers!

Takeaway: Monthly giving is a stretch gift. A potential donor can’t give $100 right now but they can do $10/month. Stretching the gift is good for the donor and recurring giving is great for your organization. It helps you with budgeting (you know revenue in advance) and you’ve signed up loyal donors. Win win!

When you send out your fundraising campaigns, include an option for recurring giving.

Most of the enewsletters I subscribe to are from the largest 100 nonprofits in the U.S.

Know who looks to the large organizations for guidance? Small shops. They’re looking to see how large shops- with supposedly bigger budgets to hire top fundraisers and marketers- make an ask, brand themselves, structure their website, organize their content.

Does that mean they’re doing it right? Based on the GT emails I got, heck no.

One of my favorite hashtags is #AlwaysBeLearning. That means learn from shops of ALL sizes. See what works and what doesn’t. Learn from others and your organization will benefit greatly.

Don’t rely on the bigger shops to get everything right.

Takeaway: Not sure if what you’re seeing is a best practice or not? I’ve got you covered in two ways:

When I think of early access, I think of something that only a select few people are given. Try a new product. Sign up for a new platform.

Early access is a way of giving something extra to those most loyal to you or to people who are early adaptors.

In the case of GT, a number of nonprofits emailed in advance to provide me with “early access” to their GT campaign.

What was this “early access?” I could donate now and not wait for GT.

Five different organizations told me to “beat the rush” of Giving Tuesday and give as early as November 23 (6 days prior to GT). One organization went so far as to use this copy in their email:

This is NOT how you build relationships with donors! Want them to give before your campaign officially gets under way? Provide a good reason and/or incentive. Offer them some swag. Maybe an extra matching gift for pre-campaign donations.

But just to tell all email subscribers to give now in advance because GT will be a busy day? No thanks.

Takeaway: Pretend your donors were you. When a company wants you to keep purchasing from them again and again, they know how to gain your loyalty.

Build a similar relationship with your donors. Offer them something special or different so they feel valued.

Number 6: Have fun out there!

But that shouldn’t stop you from mixing it up a little and putting a smile on people’s faces!

Have a look at this donation chart taken from a Student Conservation Association email: 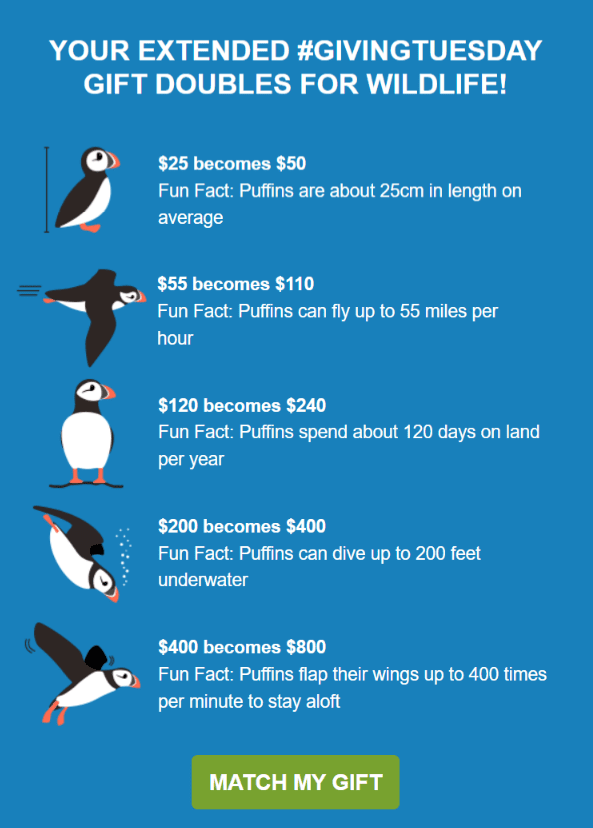 This would absolutely stand out to subscribers!

Takeaway: When you can, find a way to make subscribers smile. Even laugh. We could all use it! And yes, it could help put them in a frame of mind for giving.

Mary is dead on. Donors don’t care about your internal fundraising goals. They just don’t.

And yet one-third of the organizations who emailed me did just that!

World Wildlife Fund had a goal of 3,800 new donors. Why specifically that number? 🤷‍♂️

Heart to Heart International wanted to raise $30,000 in honor of its 30th anniversary. This goes for any anniversary campaign: The vast majority of people aren’t interested. Your anniversary doesn’t speak to them. It doesn’t help them solve a problem in the community.

And they made sure that their messaging revolved around that number. They have a goal and they NEED YOU TO GIVE SO THEY CAN MEET THAT GOAL!

In fact, eight nonprofits emailed me the day after GT to inform me they had fallen short of their fundraising goal. But hey, I could still give on Wednesday to help them reach their goal.

As Mary said: No one cares about your internal goals.

Takeaway: Share with subscribers, donors and potential supporters not just what the goal is but who will be impacted and how. Tell them WHY you would like to hit X dollars during the campaign. Give them a reason to give!

Next week I’ll share with you more takeaways about how often you should email people during a campaign, email subject lines, matching gifts, countdown clocks, online donation forms and more.