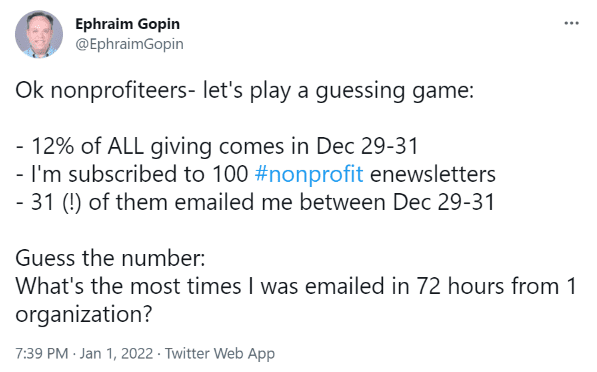 Year-end has come and gone. I’ve seen the good, the bad and the really, really ugly.

Which is what I’m going to share and rant about: The really, really ugly.

Guess the number:
What's the most times I was emailed in 72 hours from 1 organization?

Yes, you read that right. One organization emailed me NINETEEN times within 72 hours. About once every 4 hours.

And if you think that’s ridiculous, according to the spreadsheet I created, two other organizations emailed me 16 times and one other nonprofit emailed me 14 times within that three-day timeframe.

It Starts With Subject Lines

While researching my email onboarding ebook, I subscribed to the enewsletters of the 100 largest nonprofits in the U.S. (Actually, only 77 had an enewsletter which was shocking to me.) Over the last couple of years I have subscribed to a bunch of other enewsletters. So altogether, I’m on about 100 email subscriber lists.

You can imagine the nuclear disaster zone my inbox looks like at year’s end.

Email success begins even before an open and a click. It starts with a great subject line. 35% of people decide whether to open an email based on a subject line alone.

So imagine my “shock” when this is what my Inbox looked like:

In my Inbox right now:
"Time is running short"
"This is a critical moment"
"Urgent: Match starts NOW"
"Two days left"
"Triple your gift"
"It's not too late"

Not one of those #nonprofit EOY email subject lines tells donors how they can solve problems. It's all about the 💰. Sigh.

Pathetic. Now imagine getting NINETEEN from one organization, using a combination of those subject lines in every single one.

It’s year end which means it’s time for one of the all-time great movie quotes:

How would you feel if you were a subscriber/donor?!

And then it got worse when this showed up in my Inbox:

"Your Status: Pending" has to be my most hated #nonprofit end of year email subject line. I've seen it numerous times from multiple orgs.

I understand the urgency but it's basically saying:
WHY THE F$$K HAVEN'T YOU GIVEN YET?!

It's not an ask. It's an assumption I'll give. pic.twitter.com/mNDjbdRuU4

We’re talking some of the biggest NPOs in the U.S. and these are the best subject lines they can come up with?!

This is why I tell all clients: There’s plenty of positives to learn from the big boys. And plenty to learn to avoid.

At year’s end, every single nonprofit is conducting some type of fundraising campaign.

With good reason: 12% of ALL donations come in during the last 72 hours of the year.

Many of the nonprofits emailing me had matching campaigns. Many doubles and triples but a few with 7 and 8x matches. They wanted to maximize donations raised during those last three days.

But there’s a limit on how many times you should email your subscribers during those 3 days.

More than that is ridiculous, wasteful and can really upset your subscribers. Which, as you already know, is not the objective.

I was asked on Twitter why one of the largest nonprofits out there would email 19 times in three days.

My response? They don’t care about email donors. To them, email donors are small donors and they pay less attention to them than they do midsize and large donors. Their reasoning: They can acquire new donors to replace the ones they lose.

Or they’re betting you won’t unsubscribe and in a few months you’ll forget they bombarded you with fundraising asks. You’ll go back to opening their emails, signing petitions, volunteering etc.

Which of course is too bad. Small donations add up to large numbers. Small donors, when stewarded properly, can be moved up to midsize and maybe even large donors.

But when you firebomb inboxes with generic asks for three straight days? I’m calling BS on the practice.

A friend of mine told me about another very large organization that sent her so many texts messages in December that it was bordering on harassment. She told me it was making her want to scream.

Fundraisers: I sympathize with you. I really do. You’re under a lot of pressure and stress at year-end to send more emails, more texts. Raise more and more and more money.

Your bosses and Board oftentimes have unrealistic expectations. For them, year-end is a money grab. Nothing more, nothing less.

And that’s too bad.

It IS a time to raise a lot. But it’s also a time to strengthen old relationships and start building new ones. Inundating people with ask after ask won’t do that.

Stop the madness please. Email is not a spray and pray tool. Use it effectively to enhance your fundraising and marketing efforts.

Not sure how to do that? Let’s chat. I’ll set you with a winning email fundraising and marketing strategy that helps you build relationships with subscribers and convert them into donors.

P.S. For the record…

Email Fundraising Data To Learn From