Last Tuesday was Giving Tuesday. You know, the day when everyone automatically gives to nonprofits. The day every organization assumes will net them a ton of money. The day your boss made you spend a lot of time and effort preparing for, which steals time from your year-end appeal. 🙄

I am not a fan of Giving Tuesday for many reasons. But rather than complain, I try each year to look at what nonprofits are doing on this day, critique it and give you lessons to better your marketing and fundraising.

Last year I looked at Giving Tuesday Instagram posts that were a failure. This year, I decided to look at my Inbox. Once I saw what was coming in, I expanded my research into Facebook and Instagram.

I want to look at what’s a reasonable amount of times to ask people for a donation and then, once you’ve raised money, how important- or not, as you’ll soon see- is showing gratitude to your donors.

Full disclosure: I am subscribed to nearly 100 different nonprofit enewsletters. “Why the heck would you do that?!” you ask.

My answer: Research for my successful email onboarding ebook.

Sometimes that research comes back to bite me, like around the holidays, when every organization is not only in collection mode but in “send as many emails as possible to our subscribers” mode.

I wanted to see if organizations are just as pushy on Giving Tuesday.

For starters, I started receiving a few emails on the Sunday and Monday before Giving Tuesday. However, those emails weren’t reminders to donate on Tuesday. The emails asked me to donate early! Meaning, now it’s Giving Sunday, Giving Monday and Giving Tuesday. (Below I discuss Giving Wednesday. Yes, that exists as well.)

I did what every data loving person would do: I created a spreadsheet. 31 organizations emailed me last week about Giving Tuesday. 4 emailed me on Sunday. On Monday I had 22 emails in my Inbox asking me to donate early for Giving Tuesday. Doctors Without Borders emailed me THREE times on Monday.

For example: On Monday, both UNICEF and Special Olympics emailed me SIX times- yes, six each- telling me I could double and triple my donation.

Seems a bit much, no? Then buckle up because here comes the Giving Tuesday data.

To break it down:

The “winner”? International Rescue Committee (IRC) emailed me EIGHT times within 24 hours! Seems a bit much, if ya ask me. 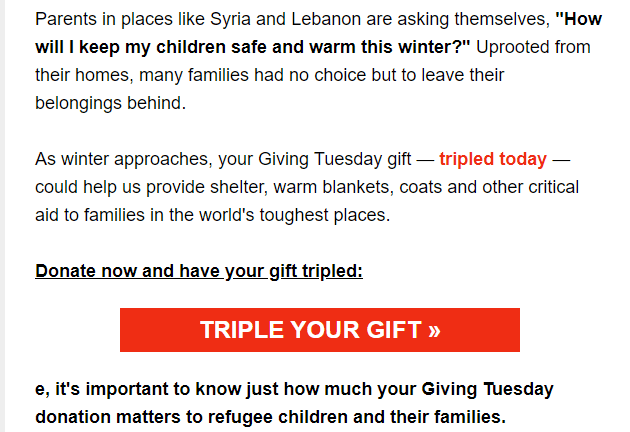 Part of a Giving Tuesday email from IRC

I asked nonprofit fundraising and copywriting expert Mary Cahalane to share her thoughts about the number of asks I received via email in one day:

“How many emails? I don’t know that anyone has a magic number. But I do know this: we tend to treat email like the lottery. It’s cheap, so buy a lot of tickets and you’ll have a better chance of winning? In reality, your increased chances are minimal. So just because email seems cheap, pounding your supporters’ inboxes isn’t going to help. Try resending to non-openers with a new subject line a few times across the day instead.”

So once Giving Tuesday ended the emails would stop, right? Wrong! Many of the nonprofits who emailed me on Giving Tuesday had matching gifts programs. My donation would be doubled, tripled and in one case, every dollar would be multiplied by 8.

So before I continue: THANK YOU to all the extremely generous donors out there who used their giving to help organizations double and triple what they raised!!! I sincerely mean that. Knowing that a donation would be doubled or more, knowing that more people would benefit makes a donor feel even better about their giving.

Back to Wednesday: 10 out of 31 nonprofits emailed me that their Giving Tuesday matching gifts program had been extended and that if I hadn’t had a chance to donate on Tuesday, Wednesday was a great day to give.

9 out of 10 emailed me once on Wednesday. Know who emailed me twice? Yup- IRC.

Maybe these organizations didn’t hit their target and the generous donor extended the matching offer an extra day. Maybe they hit the target but used the matching for an extra 24 hours to raise even more.

Because I want to trust nonprofits, I’ll believe the first statement in the last paragraph. But here’s the thing: Giving Tuesday now includes almost the rest of the week. Will Giving Tuesday become Giving Week in 2021?

If the emails weren’t bad enough, this section should make every nonprofiteer out there angry. Or worse.

I decided to keep tabs on how many nonprofits sent out a thank you email to everyone after Giving Tuesday.

FULL DISCLOUSRE: I did NOT donate to any of the organizations I received email from. So it’s extremely possible nonprofits sent out a thank you email but only to those who donated. Though I’d still tell them to send a mass email to everyone, thanking those who gave and showing the overall impact the Giving Tuesday donations will have on their beneficiaries.

Sadly, only 7 out of 31 organizations sent a mass thank you letter.

A paltry 23% of those who emailed me asking for a donation. Because of the Giving Wednesday emails, I waited until Thursday at 10am EST to receive a gratitude message. Only 7 of 31.

Apparently, just because you gave doesn’t mean the organization should show gratitude. Why bother?! 🙄

LESSON: When you’re planning a campaign, you MUST plan the gratitude part as well. Why? It helps build the relationship with your donors. It helps to demonstrate impact. But more important, as Dr. Adrian Sargeant has pointed out: “The thank you is the single most important piece of communication that your donors get. They have a higher recall of it than the appeal that generated the gift.” Donors remember that you thanked them. That’s going to do wonders for your retention rate.

As I mentioned above, it’s very possible the organizations sent each donor a thank you email right away after they donated on Giving Tuesday. I did not donate so I don’t have that data. But I would think that each organization, after bombarding everyone with emails, would also want to send out a mass appreciation email to let everyone know how they’ve helped people in their community. 3 out of 4 nonprofits didn’t bother with that last bit. 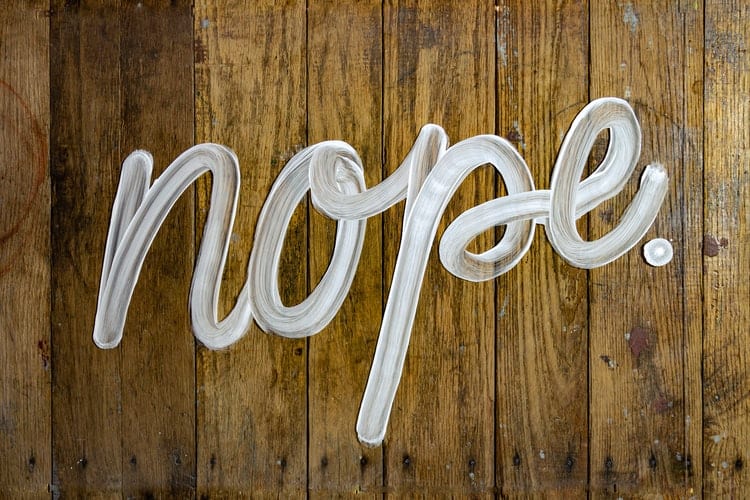 Photo by Daniel Herron on Unsplash

Note: I included posts from both Monday and Tuesday. (Some posted on Monday to remind people to donate the following day.)

The above data is abysmal and unforgivable. How tough is it to post a thank you to your supporters and show them gratitude?! Apparently, too tough for the majority of organizations that posted on Facebook and Instagram.

Heart to Heart International and Westminster Neighborhood Services posted EIGHT times on Facebook about Giving Tuesday. Kudos to them for posting a heartfelt thank you to their audience.

On Facebook, maybe 1-2% of your audience will see your page posts in their feed. So it makes sense for organizations to post more than once. Though 9 times over two days is too much. They’d do better by boosting a post or two and thus engaging a larger audience.

Instagram Stories is where the action is at: 300-500 million people daily view Stories. I did not check Stories but I hope that each organization posted there. Posting 6 times over 2 days in the Instagram feed? Too much. I understand the goal (max eyeballs) but it’s too much.

IMPORTANT TO NOTE: In most cases, when nonprofits posted multiple times on Instagram and Facebook, the image they used each time was different. That’s a good thing! Test and see which images do best in terms of engagement.

I know many nonprofits see Giving Tuesday as a big day for donations. Then let me ask you this: Now that you bombarded people via email, Facebook and Instagram, will you take a break and not make year-end asks for at least another week?

I at least hope your list is segmented so that anyone who gave on Giving Tuesday wasn’t emailed on Wednesday with a year-end ask. That’s not a display of the “g” word- gratitude. It’s a display of a different “g” word: greediness.

Year-end fundraising campaign time approaches. Is your website content prepared? Email marketing strategy ready to be implemented? Social media posts planned out? If your nonprofit wants to strengthen relationships with donors and raise more money, then your website, email and social media need to be in sync and ready to go when your campaign commences.

Not sure how to pull it all together? Contact me and let’s plan a successful year-end campaign together!