On July 4, 2014, American Apparel reposted this picture to their Tumbler account: 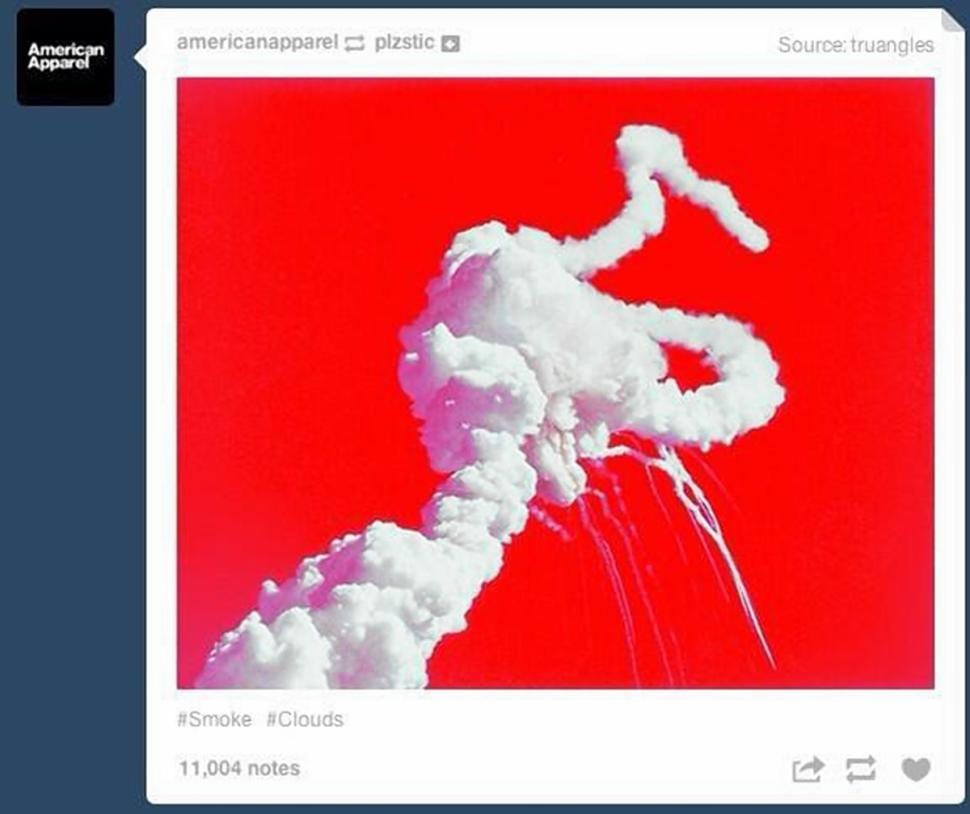 Their social media employee was using the picture to show the after effects of fireworks in the sky. They hashtagged the post #smoke and #clouds.

I’m sure readers of a certain age recognize the picture: That’s the immediate aftermath of the explosion that occurred aboard the Space Shuttle Challenger on January 28, 1986, 73 seconds after liftoff. The explosion killed all seven crew members.

Back in April, Chase tweeted this: 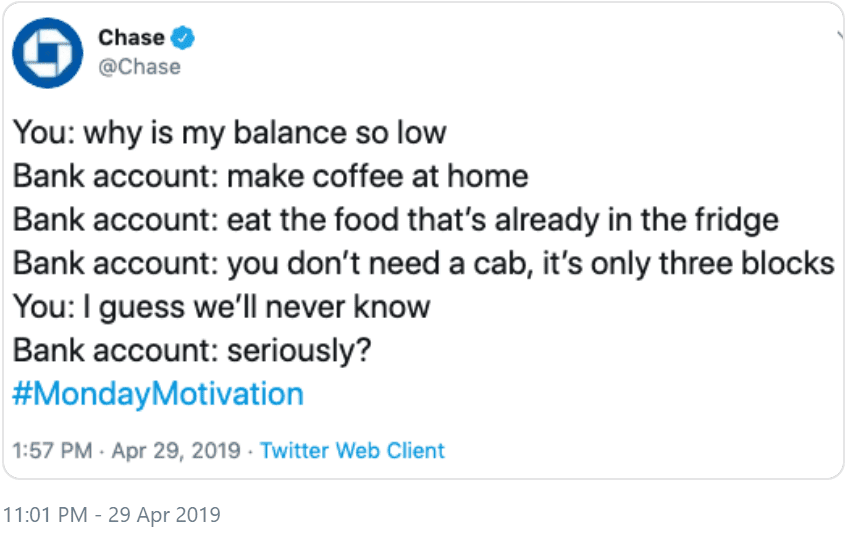 As tone deaf as it gets. To compound the error, they completely misused the hashtag.

Organizations should have social media policies in place which spell out what you can and can’t post. Some of it is pretty common sense but that doesn’t mean it shouldn’t be typed out and given to all employees with access to a company’s online accounts.

However, online mistakes will happen. The question is how an organization deals with it afterwards. People can be pretty forgiving if you know what to do.

Here are the 5 steps towards receiving forgiveness for a very public faux pas.

Own up to the mistake. People make mistakes. No one’s perfect.

Claiming your account was hacked is not gonna cut it, especially if later it’s revealed that the errant tweet wasn’t the result of a hack.

On the left, I have erased the “c” word that originally appeared in the tweet.

This one was pretty bad. Their response turned out to be a lie. Which made the problem even worse.

When our children make a mistake, we teach them to own up to it. Take responsibility. Same applies to your business or nonprofit.

I get it. Sorry is one of the hardest words to say. But it must be done. Whether it was intentional to offend or by mistake insensitive, your followers were insulted by your post. You need to say sorry.

And not a half-assed sorry. A full on apology. Express remorse and regret. People will accept a sincere apology. If you’re just apologizing because some higher-up told you to but it doesn’t come across as genuine, you’ll be doing even more damage to your brand.

As I mentioned earlier, Google never forgets. When brands make online mistakes, people screen shot the offending post right away. (I have a folder of hundreds of these types of mistakes). So the post isn’t going away anytime soon.

But that doesn’t mean you should let it live forever in your timeline. Take a look at this post from Belvedere Vodka: 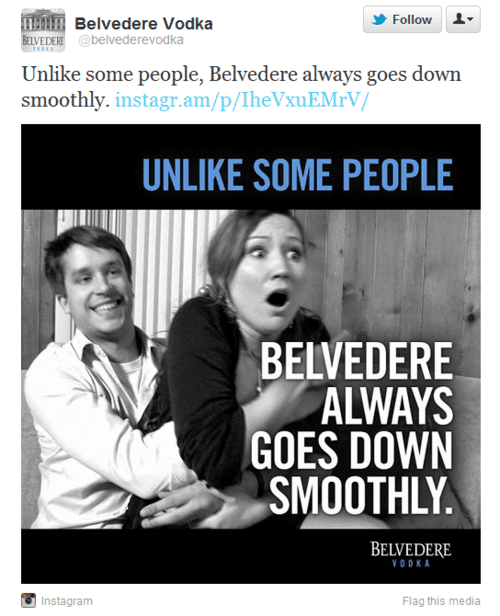 Would you leave that up or take it down and issue an apology? Leaving it online could do irreparable damage. Take the post down. Even if people like me will use it in presentations forever.

4) Explain Why it Happened

Sometimes, there is a logical explanation for why a brand posted a rogue tweet or post. If that’s the case, explain why. It adds another layer to the apology.

As I stated earlier, we all make mistakes. Sometimes dumb ones, sometimes logical ones (“we thought we were doing the right thing”). Tell your audience what happened. People will understand.

When there’s no explanation for a really offensive post, then say that: There was no excuse for this getting posted. We were wrong. Period.

This is the toughest step. A social media policy can help. Common sense helps. But mistakes can happen again.

Let’s go back to 2012. Hurricane Sandy swept through Manhattan leaving damage and destruction in its wake.

During the hurricane, American Apparel posted the following online ad: 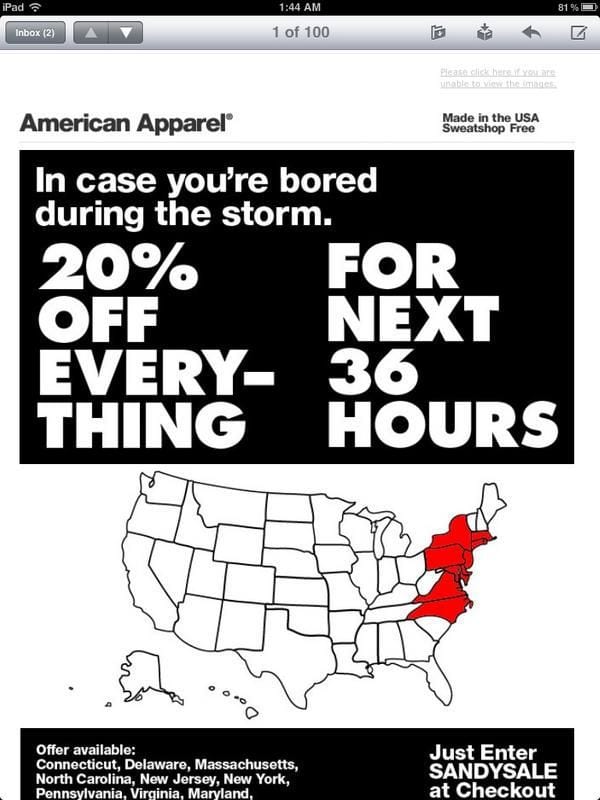 Horrible. People have lost everything. They need their phones for emergencies. Internet is down. No one has time for shopping when they’re just trying to survive.

American Apparel took a LOT of flak online for that ad. They didn’t apologize for it.

But they learned their lesson: Remember the tweet from the beginning of this post? Here’s what American Apparel did very shortly after the post went up on Tumbler: 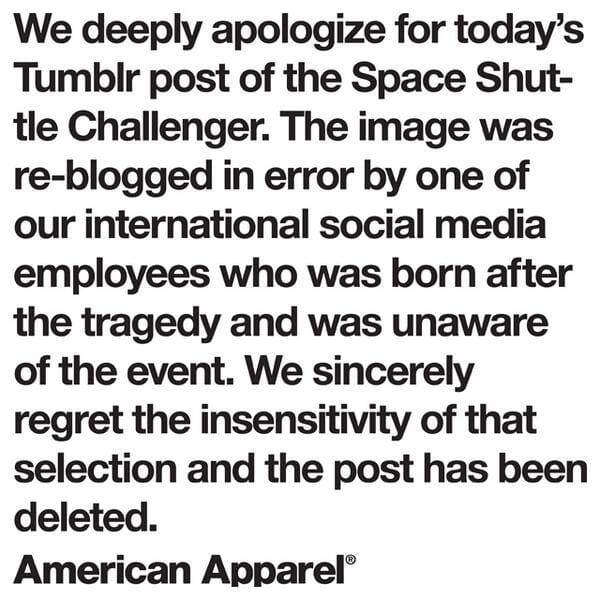 They owned it. Apologized right away. They deleted the post. Provided an explanation. And although a mistake happened again, they learned what to do from the aftermath of the Hurricane Sandy ad debacle.

Online mistakes will happen. How your organization responds is key to obtaining public forgiveness.