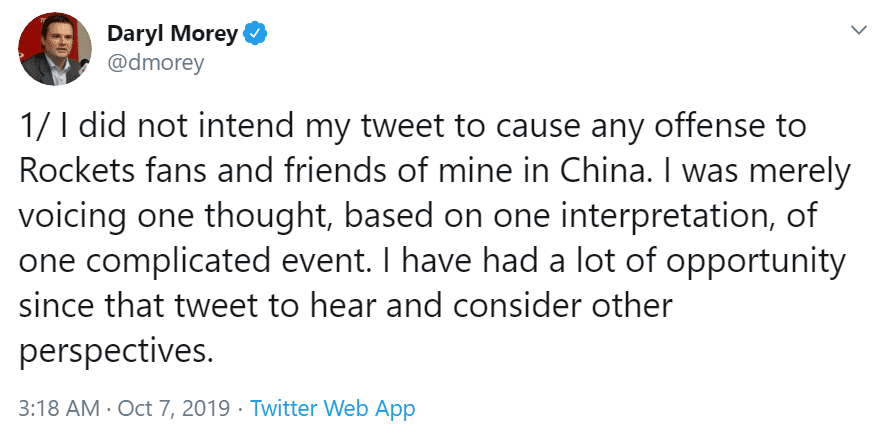 When an employee tweets and sparks an international firestorm, it is worth looking at and considering how employers treat their employees off hours endeavors.

On Friday evening, Daryl Morey, the general manager of the NBA’s Houston Rockets, tweeted the following: 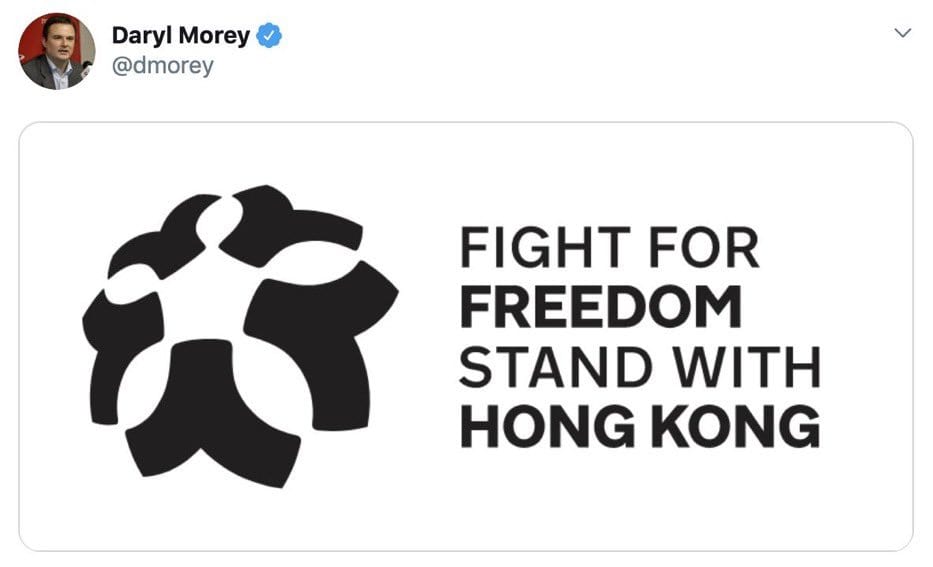 The big deal? He angered China. Both the China Basketball Association and the Chinese Consulate in Houston reacted angrily to the tweet. The Consulate urged the NBA to “correct the error.”

The bigger deal? The NBA is China’s most popular sports league and has deals there worth billions of dollars. And the Houston Rockets? They are one of the most popular teams in China. This goes back to the days when Yao Ming played for the Rockets.

The biggest deal? The right of an employee to tweet about an issue not related directly to their job. The ongoing protests in Hong Kong have garnered widespread support in many Western, democratic countries whose citizens are sympathetic to the cause. The Chinese government and its people? Not so much.

The “offensive” tweet by Morey could damage relationships and partnerships. The NBA is looking to enlarge its global reach. But tweets like Morey’s hurt the brand, as the NBA head honchos don’t want to offend their Chinese counterparts.

It’s All About The Money

The NBA of course wasn’t happy. The prospect of losing a huge chunk of cash, television rights, advertising and more made the suits in the head office very uneasy and defensive.

Mike Bass, the NBA’s Chief Communications Officer, issued this statement: “We recognize that the views expressed by Houston Rockets General Manager Daryl Morey have deeply offended many of our friends and fans in China, which is regrettable. While Daryl has made it clear that his tweet does not represent the Rockets or the NBA, the values of the league support individuals’ educating themselves and sharing their views on matters important to them…”

My question: What if Morey had done what the NBA suggests? What if he had educated himself and had come to the same conclusion? Would the NBA be okay with his tweet?

According to The Athletic’s Shams Charania, the NBA will NOT be disciplining Morey.

But what about the Rockets? Here’s where things get a little murkier.

The owner of the Rockets responded to the controversy:

Listen….@dmorey does NOT speak for the @HoustonRockets. Our presence in Tokyo is all about the promotion of the @NBA internationally and we are NOT a political organization. @espn https://t.co/yNyQFtwTTi

The Ringer is reporting that the Rockets head honchos have definitely discussed removing Morey from his position. This would help appease the Chinese and companies with ties to the team in China. Tencent, which owns the NBA digital rights in China, has already announced they were suspending streaming Rockets games.

Without overtly saying so, firing Morey would go a long way towards repairing whatever damage Morey’s tweet caused abroad.

Morey has deleted the “offending” tweet and instead posted a clarification. It is important to note that in these tweets he does not apologize for the original tweet. Rather, he states that it wasn’t his intention to offend the Chinese people and NBA fans across China.

Is this enough to save his job? As of this writing, he is still the Rockets GM. But I have a funny feeling that if there’s more fallout and more businesses suspend partnerships with the NBA until the issue is “fixed,” Morey will be let go.

But should he be?

I am sure that Morey, as well as all employees of the Rockets, has signed a social media policy of some sort. That policy outlines in broad terms what he can and can’t post online. I can assume it includes clauses related to refraining from posting negative or derogatory comments about the team’s partners.

The NBA’s statement above could have given Morey some leeway- if Morey hadn’t copped to only basing his opinion on one interpretation of events. Morey’s intention was to support the people protesting in Hong Kong and not to be critical of China. However, there are many sides to what seems to Americans as a clear and cut issue.

What The Rockets Will Do

In a previous post I discussed the possible firing of a volunteer for a tweet. But in this case, Morey is a paid employee of the Rockets and of the larger, global NBA franchise.

Do I think he should be fired? No. The Rockets and NBA should be supporting his right to speak freely about the protests in Hong Kong. If Morey feels strongly about the democratic right to protest, then there’s no reason he should be stopped from expressing those views.

Unless those views violate a clause in his contract. In which case his employer, the Houston Rockets, have to consider his off-court statements and decide whether to terminate his employment.

If I had to hazard a guess, within 2-3 days he will be removed from his position. Or it will be strongly suggested that he resign “for the good of the team and the league” and he will do so.

At the end of the day, money talks. Billions are at stake. The NBA and the Rockets can’t forfeit that kind of cash. So they’ll throw Morey under the bus and everything will go back to normal.