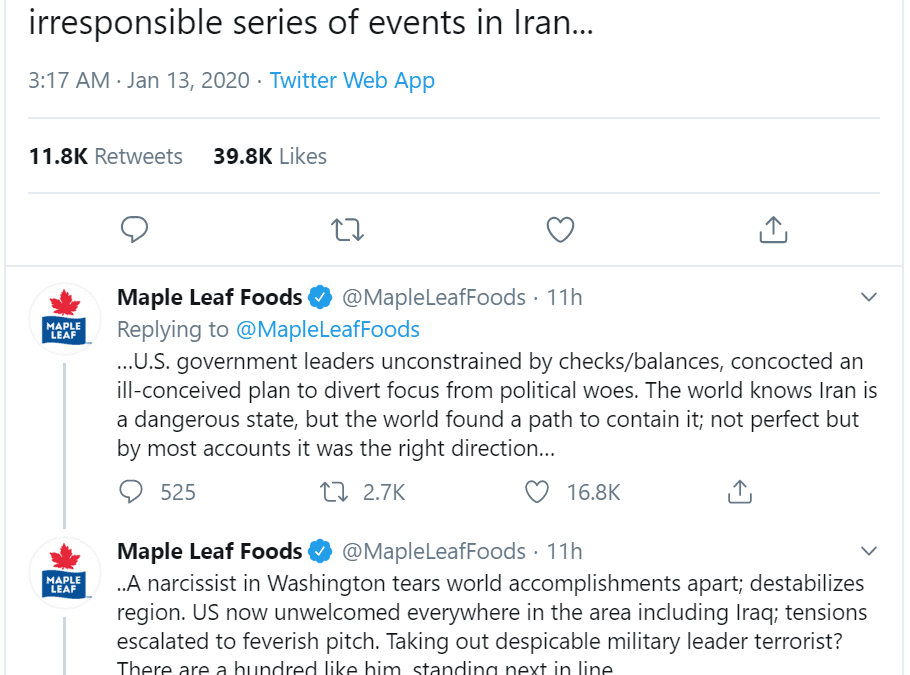 When I work with clients, deliver presentations or do training sessions, I always talk about the personality behind the logo.

Whether you’re a nonprofit or a business, your online followers want to interact with a person, not a faceless brand logo. Which means that when planning a strategy, your brand should decide what type of online voice and persona it’s going to present.

That strategy should include guidelines and rules for what people managing the corporate accounts can and cannot post. Those can be very general or dive deep into specifics. I usually advise clients to steer clear of religion, sex and politics. Nothing good can come from posting about those topics- unless your brand is very clearly identified with something related. Then by all means, tweet away!

But When The CEO Does It, It’s OK?

Take a look at this set of tweets from the CEO of Maple Leaf Foods, a publicly traded company in Canada: 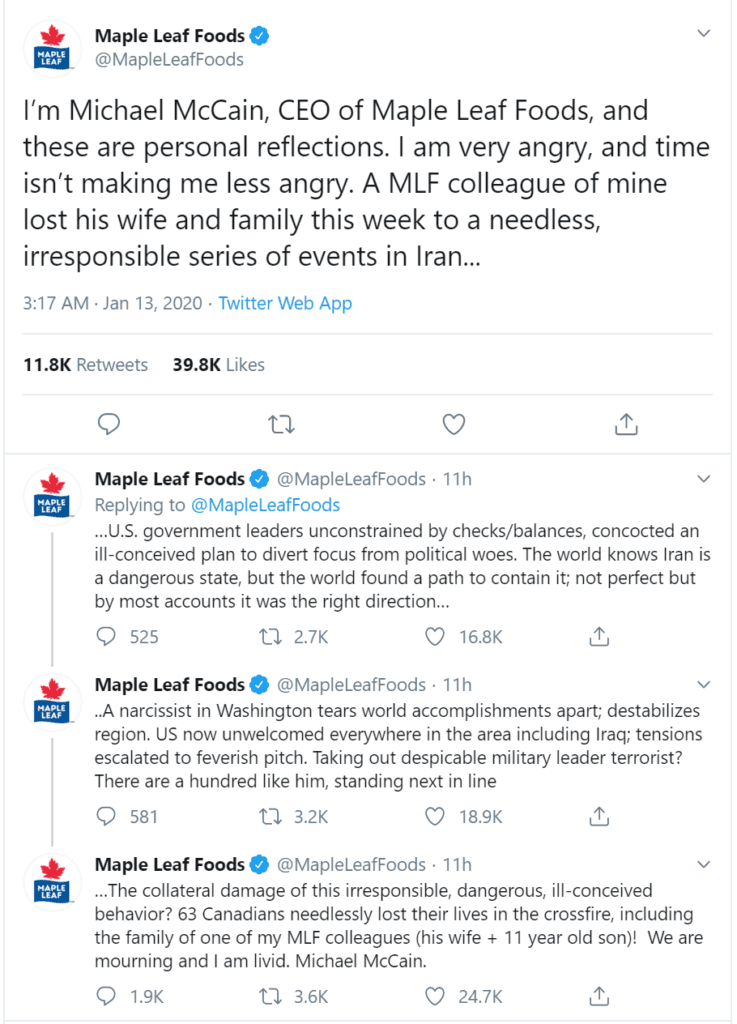 I’ve got a lot of questions:

1) I assume Maple Leaf Foods has a social media/online policy that all employees have to follow. Do the tweets violate those guidelines?

2) Should the CEO have tweeted this out from his personal account, rather than the corporate one?

3) We can certainly say this case is an “outlier”- a company is grieving for fellow employees & their families. But is that reason enough for the CEO of a publicly traded company to air his grievances in a personal manner from the corporate account?

4) I assume he wouldn’t allow regular employees to tweet about politics from the corporate account. All fine and good. He’s the CEO and has the authority to consider exceptions to the rules. Or does he? Did he need to get permission from the Board to tweet this? How about company lawyers?

5) The tweets have a political angle. Could it affect the company stock price? Trump’s approval ratings in Canada may not be great but that doesn’t change the fact that a CEO of a company with shareholders took some shots at Trump and his policies.

What Would I Have Done?

Let me bring in an expert, Brad Phillips. Mike had originally asked him what he thought of the tweets and here was his response: 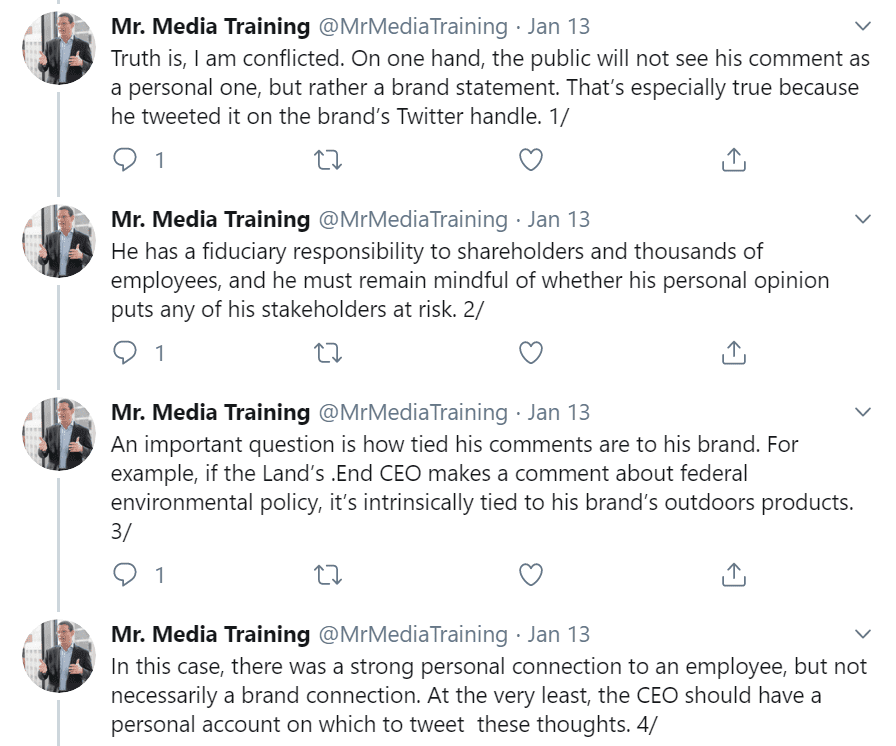 In many cases, brands are afraid to take chances. They keep their tweets and posts very corporate-y and mostly bland. Some brands, like Charmin, Wendy’s and R/GA, are willing to be creative, humorous, snarky and push the envelope. Their followers have come to appreciate that and they associate that “fun” aspect with the brand.

Maple Leaf Foods tweets are quite par for the course, to be honest. I went back in their timeline and nothing stood out as controversial or different. Mostly tweets about the company and their commitment to sustainability, the environment and other causes.

So the tweets from the CEO stand out like a sore thumb in their timeline. I’m guessing that under normal circumstances, the tweets would violate the company’s policies.

Though I understand how much the CEO and his fellow employees are grieving, his tweets should have been posted on his personal Twitter account. Yes, the account would have identified his position at Maple Leaf but it’s one degree removed from the corporation. By posting using the business account, he has created the impression that the company opposes Trump’s Iran policies.

As a publicly traded company with shareholders from all walks of life, these types of tweets have the potential to be disastrous in the short-term for a large company. I have to assume he went to the Board and/or the in-house legal team to run his tweets by them first. Because if he didn’t, no matter how polite Canadians might be, Board members could become infuriated knowing the stock price could suffer.

Stay Away From Politics

As I said towards the beginning, I’m not a fan of tweeting or posting about politics from a corporate account. (If you’re Planned Parenthood and the current administration policies are completely against what you and your followers stand for, then I’d understand publicly calling out Trump and his policies.) A business account can publicly show some personality but there are limits.

Back in August 2010, Steve Norris, a politician in the U.K., suggested that the London National Theatre “should  have a compulsory demolition order!” To which the National Theatre responded:

I edited out the “c” word that they used. They deleted the offending tweet but here’s the thing: Followers of that account APPLAUDED the initial tweet! As one follower put it, “Nice to know the person running the account has a personality.” OK, so maybe that wouldn’t be the type of personality display I’d suggest but you get the point…

The Face Behind The Logo